Personal Development in Your Inbox

On the Morning Upgrade Podcast, I talk with entrepreneurs about their morning routines, challenges, and personal development. Here’s a roundup of morning routine ideas that will get you thinking about what you can do in your own life.

Episode 81 talks about the morning routine of Terry Tucker. He is a former police offer who loves spending time with his family and owns his own business. To get his morning off on the right foot, he takes some time to pray and post a motivational quote or video on his blog. He then likes to drink a healthy smoothie each morning.

I had the pleasure of talking with Courtney Wright on episode #82 about her morning routine. She is the owner of a series of companies, known as Gemini Builds It. Her morning routine begins at 4:40 a.m., for no particular reason without an alarm. On her way to the kitchen, she says a gratitude prayer, drinks green juice and prepares food for the day. She will then shower and leave the house by 5:30 a.m.

I spoke with Marques Ogden on episode 83 about his morning routine. Marques is the jack of many trades, he is an international keynote speaker, former NFL player, executive coach, and best-selling author. He begins his day with his wife and child, helping them prepare for school. Once they are off he heads to the gym.

In episode 84, I talk with Maria Brito about how she likes to begin her morning. Maria is an art advisor and curator by trade. She begins her morning routine daily at 5:30 a.m. with a cup of coffee. After that, she runs to the gym to get in a workout and then runs back home. To get ready for the day, she will take a shower and meditate before work begins.

In episode 84 I talk with Jonah Larkin about his morning routine. Jonah is an executive coach who enjoys spending his free time surfing. He has a set routine that he likes to follow to get his day started in the right way, such as:

I speak with Jody Lane on episode 86 about her morning routine. Jody is the COO of the Florida Center for Hormones & Wellness and the Founder of the Green Leaf Group.  She has a morning routine that she likes to follow, such as:

I had the pleasure of talking with Tanille Royston on episode 87 about her morning routine. Her morning routine is all revolved around spending time with her kids. After she helps everyone get ready and out the door, she walks them to school.

Alice Shikina is a mediator and negotiation coach, and I had the pleasure of talking with her on episode 88. She talks about how she doesn’t have a set morning routine that she follows each day, but does have a visualization routine. This involves meditating about what she wants to accomplish in the future for her life.

I talk with Gabe Arnold on episode 89 about his morning routine. He is the founder and CEO of Business Marketing Engine. His Alexa is set to turn on the lamp light at 5 A.M., and his alarm goes off 5 minutes later. The first step in his day begins with driving down the street to a park for a mile walk. Some of the other things he likes to do are:

In episode 90, I talk with Bri Tartaglione, a small business owner, podcaster, and professional speaker. We discuss her morning routine to help her begin her day on the right note. She likes to keep things simple and wakes up at 6:30 A.M. and reads up on current news and reads on something educational.

I hope these ideas will inspire you to put together a routine that works for you! 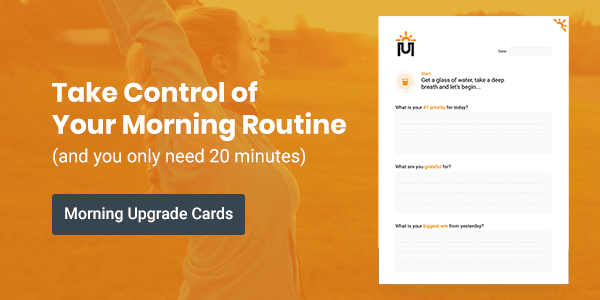