Book Summary Review: How to Win Friends and Influence People 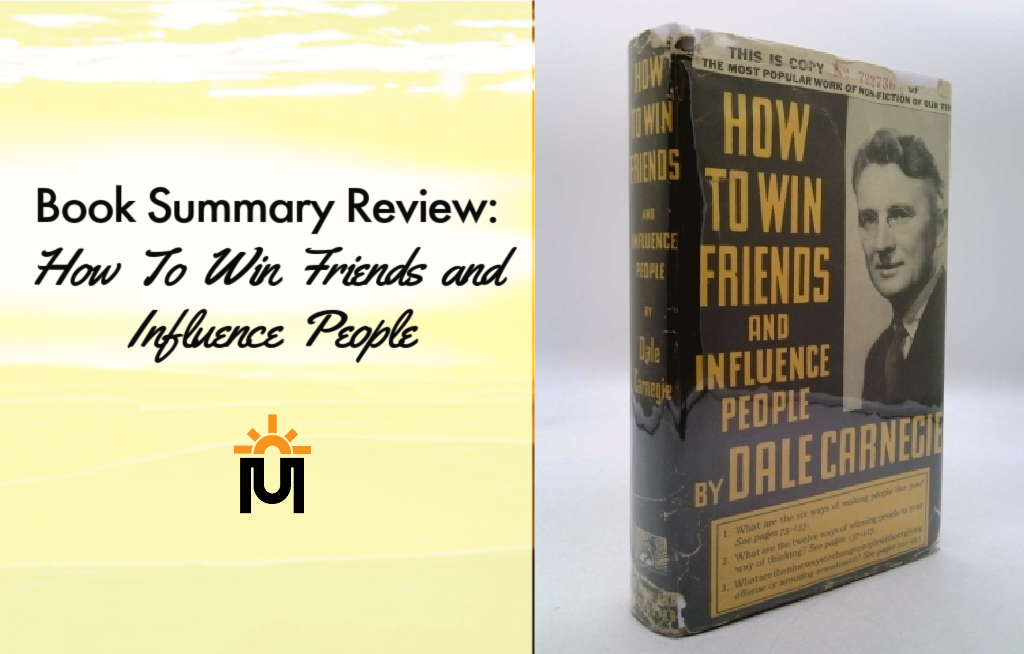 Dale Carnegie’s How to Win Friends and Influence People is a non-fiction book published in 1936. The book offers a great guide for readers for achieving good lives in various life areas, including emotional, spiritual, mental, and economical. According to the author, this is an action book with many exercises for the readers to practice. The book contains thirty chapters and is divided into four main parts. Every part of the book covers a different aspect of effectively interacting with people, from those easy to interact with people to the difficult ones. It is also worth noting that each chapter ends with a statement dubbed principle that summarizes the chapter’s main points.

In this part, the author emphasizes on the social directive, Don’t Criticize, Condemn or Complain. When criticism is used in relationships, people react by justifying themselves rather than admitting mistakes and looking for ways to change. Instead of criticizing others, Carnegie points out that people should work towards understanding others as well as forgiving them.

In chapter two of the book, the author reveals the big secrets of handling people, including offering honest and sincere appreciation. What do you do to make an individual work on an assignment? According to Carnegie, the only effective way to make an individual do something is to make them want to do it.

People crave appreciation and mostly thrive on encouragement. However, this desire is rarely fulfilled. Most managers are always condemning their subordinates, while some spouses are always blaming their partners. If people are always condemned and never appreciated, they are discouraged and stop trying to change for the better. Carnegie points out that the primary secret to handling people is giving an honest and sincere opinion.

Chapter three explores more on how to arouse a person’s eagerness towards doing something by telling them the benefits and drawbacks. For example, when designing a business letter, business people should focus on the customers’ benefits rather than the company’s interests.

Unfortunately, many businesses showcase their selfishness in their business letters by never stating the benefits the customers will attain if they purchase the company’s product or service. Carnegie proposes that instead of trying to sell their products, salespeople should demonstrate how their products and services will help the consumers solve their problems.

Part 2: Do This, and You’ll Be Welcome Anywhere

In the first chapter of part two, the author argues that to make friends, one should show interest in other people’s affairs instead of trying to impress them. For example, showing interest in seemingly unimportant people sometimes leads to greater popularity, new opportunities, and benefits. Being genuine and interested in others means treating them respectfully, being concerned about their affairs, showing interest in what they love, doing favors, and mastering their names.

In the second chapter, the author discusses the importance of a smile. The book quotes the Chinese proverb, “A man without a smiling face must not open a shop.” Carnegie notes that a smile works as a messenger of goodwill and can also be likened to the sun breaking through the cloud and offering good news about a person.

In the third chapter, the author advises people to commit to mastering others’ names. Forgetting an individual’s name can indicate to them that they are unimportant. Ways in which an individual can memorize names include asking for spelling for uncommon ones, repeating the name severally while talking, writing the name down and visualizing it, and associating the name with the individual’s general appearance.

The fourth chapter explores more on becoming an effective conversationalist through being an effective listener and motivating others. The book notes that becoming a good listener requires the speaker to maintain eye contact with listeners and give them undivided attention. Good conventionalists, in this case, listen carefully, avoid interrupting others, maintain eye contact, and offer honest praise to listeners instead of criticism.

The next chapter focuses on how to make oneself interesting by letting others speak about themselves. Carnegie also shares tips on how to make oneself interesting including showing others genuine admiration and appreciating them without hidden motives. Doing such opens the door for many friends and happiness. The main lesson of this chapter is that everyone wants to feel happy and appreciated.

Part 3: How to Win People to Your Way of Thinking

In this part, the author explores more on arguments. According to his philosophy, when one loses an argument against someone, you lose it, and when you win an argument, you still lose it. Winning an argument against another makes them feel lesser. Such may also hurt their ego. The best way given in this chapter to win an argument is by avoiding it. Some tips can be used to avoid disagreements, including welcoming them which offers a great opportunity to correct them. Other strategies include being honest, controlling temper, and examining the areas of agreement in a disagreement.

Which is the best strategy to make enemies? In chapter two of part three, the author offers the key strategy of making enemies which is telling them they are wrong. Telling an individual they are wrong feels like an attack. The next principle discussed in this part includes admitting wrongs and correcting them instantly. Admitting mistakes elicits compassion and understanding, which contributes to a good relationship.

In chapter four, the author talks about handling uncomfortable conversations with an opponent. The first step towards such is being friendly through using a friendly tone, being sincere, and looking for common ground.

What are the safety valves when handling complaints? According to Carnegie, letting the aggrieved party do the great value of talking is wisdom. Unfortunately, people do the opposite. This book recommends letting the aggrieved individual do much of the talking, and the other party should listen attentively.

Nowadays, the key to human relations is knowing that the other party might be incorrect but unaware. As an effective speaker, being compassionate and sympathetic to others’ ideas is key rather than forcing ideas on others during a conversation. Carnegie offers a magical phrase that can stop every argument; “I don’t blame you at all for feeling the way you do. If I were you, I would undoubtedly feel the same way?”

This part of the book talks more about leadership and changing people without offending them or provoking resentment. According to Carnegie, when correcting an individual, starting with praises helps. It is easy to listen even to displeasing information, for example, correction, after listening to praise.

The book notes that “Beginning with praise is like the dentist who begins his work with Novocain. The patient still gets a drilling, but the Novocain kills the pain.” The next principle calls for attention to others’ mistakes indirectly. Before criticizing others’ actions, the speaker should always talk about their own personal shortcomings. This approach acknowledges that the speaker is also prone to mistakes.

The next chapter teaches readers to ask questions rather than offer directions. Many people hate orders, but questions may provoke them to take action. The author argues that asking questions is a great way to make an order since it arouses a person’s inventiveness.

Chapter five talks about saving others’ faces during embarrassing situations. For example, an employer should never condemn an employee in front of others since such injures their ego. Lastly, the author notes that people tend to live up to the name given. As an employer, one should give their employees higher positions. Such provokes them to work harder and to live up to the position given.

In summary, even though Carnegie’s book was published in 1936, the lessons remain constant and applicable to modern life. The book teaches that effectively connecting with people is a skill, not a natural talent. In this case, people should spend time learning how to connect with others effectively.