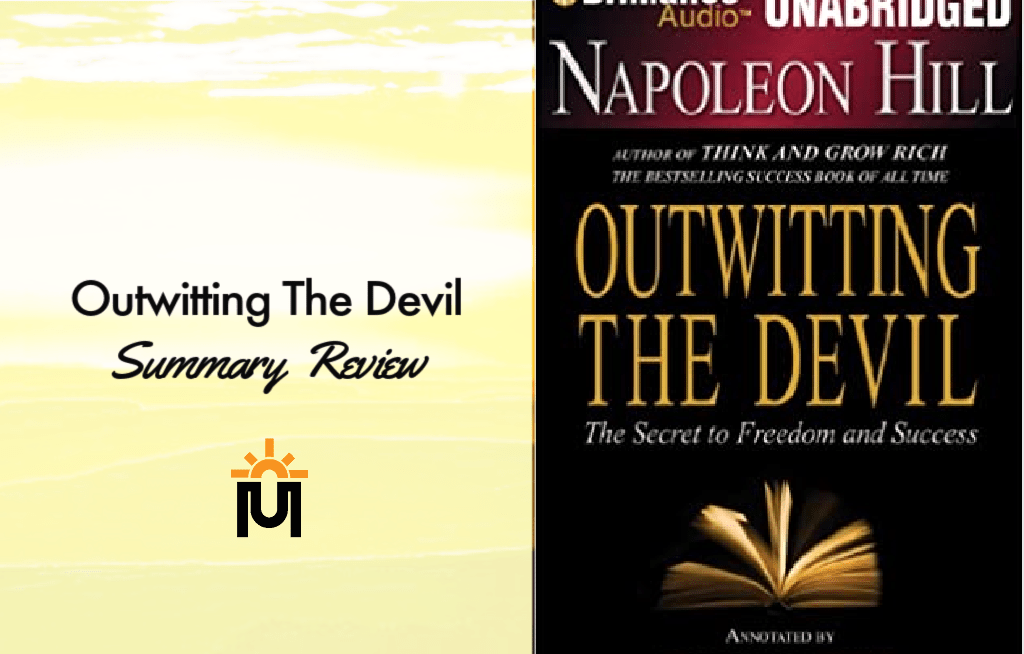 Outwitting the Devil: The Secret to Freedom and Success is a creative interview between Napoleon Hill, the author of the book, and the Devil himself (the inner dark self). Hill is considered one of America’s most influential and great thinkers whose works continue to impact significantly even today. In this interview, Hill wrings some truths concerning the roots of evil, meant to help the readers avoid the Devil’s grasp and live a meaningful and good life. He tries to unearth the secrets to success and freedom by examining the most significant obstacles people face to achieve their personal life goals. Applying his legendary skills to get to the roots of human potential, Hill dives deep to discover how fear, anger, procrastination, and jealousy (evils) prevent people from realizing their personal goals.

The first two chapters of the book begin with Hill describing his principal purpose for more than 25 years. That purpose was to isolate and organize into the philosophy of achievement the cause of failure and success to help people without the inclination or opportunity to engage in the kind of research he was undertaking. Hill’s adventure started in 1908 when he interviewed Andrew Carnegie, America’s richest man. When Hill revealed to Carnegie that he intended to get into law school, interview successful people, and make some money on the side, Carnegie had a different thought about Hill’s proposal. The business magnate thought Hill should interview full-time and discover their successes and failures.

Carnegie was convinced that people needed to learn from others who have experienced what they want to learn, the school of life, instead of focusing so much on books. Hill bought the idea and set out to interview people full-time. He interviewed 25,000 ordinary people and 500 extraordinary outliers to develop the philosophy of achievement. Carnegie also advised Hill that by the end of his study, he would realize his “other self” that would help him locate success. Hill was not sure about the meaning of Carnegie’s remark but pursued the project anyway.

From chapter three to the end of the book, Hill explores his interview with the Devil. Throughout the interview, Hill learned how the Devil controls people’s minds and what to do to avoid the Devil and to accomplish his own life goals. As Hill proceeded to interview people, he talked about the ups and downs he faced. Hill interviewed successful individuals, among whom were Thomas Edison and Henry Ford, and ordinary people who had experienced failure. Throughout the period, Hill worked different jobs including sales, advertising, and publishing, to support himself. He was, to an extent, successful in his work, but he never felt satisfied. Hill left his job in 1923, feeling extremely low, with no plan to make a living. Hill’s other self awakens during this period telling him to write up what he had discovered during the interviews. He immediately began writing following this sudden burst of self-awakening, finishing the writing in 1924.

Hill identified a potential publisher for his work, but unidentified people from the criminal underworld killed the person. The killers later called Hill, telling him to run for his life. The experience frightened Hill stealing away all the momentum he had gathered listening to his new self. In 1927 another self emerged, telling Hill to borrow money and travel to the Philippines, which he did. While there, another self told him to check into an expensive hotel even though he did not have enough money, and he did the same. This time, he was motivated by faith and not fear. Again, another Hill’s self emerged, telling him that an acquaintance would publish his books, which proved to be true. The consulting job and advance he received covered his hotel cost. Soon after, Hill started receiving royalties because his books became best sellers. However, Hill’s fortunes ended in 1929, when he lost everything due to the stock market crash, just like so many other people at that time.

However, by this time, Hill had come to understand that his misfortunes would be temporary. Unperturbed by his bad luck and no longer driven by fears, Hill was convinced that he could hear the Devil’s thoughts. He seized this opportunity to interview the Devil. Throughout the lengthy discussions with the Devil, Hill learned that the Devil controls 98% of all souls, and a discussion is underway on how to win the remaining 2%. Hill belonged to the 2% that operated outside the Devil’s territory of influence. Negative thoughts, fear, keeping humans in poverty, and guaranteeing they are unhealthy are some of the ways the Devil controls people. The Devil also talked about negative habits such as smoking, and even of schools and parents that prevented children from thinking. Hill also offers in the book seven principles to help people gain freedom from the Devil.